With today marking 20 years since we lost the great Kurt Cobain, a replay of some of the biggest Nirvana hits seemed in order - Enjoy!

Email ThisBlogThis!Share to TwitterShare to FacebookShare to Pinterest
Labels: Replay 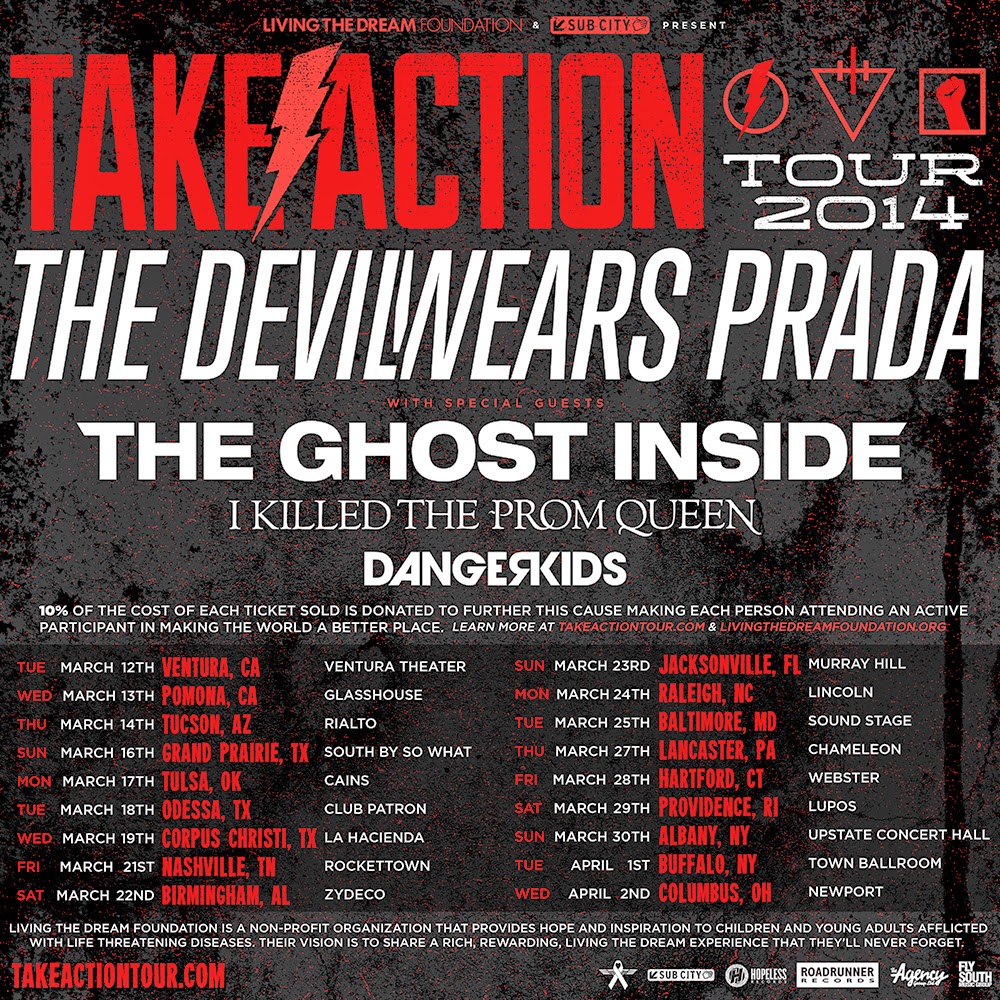 Nothing builds anticipation in the crowd quite like the first few chords from The Devil Wears Prada, which come echoing out through the smoke as you stare up at their signature backdrop. The illuminated logo, impressive lights and smoke effects used by this band are all part of the impressive ambience and unforgettable performance that Prada bring to the stage, taking their incredible music to a new level at every live show.

For this tour, Prada deliver an array of their music, with offerings from their latest release 8:18, including the title track, through their backlog of old favourites. They delivered a great variety to the Glasshouse, from their slow and melancholic numbers to the relentlessly fast-paced tracks which drive the pits into disarray. Prada know how to change their pace and keep it captivating through the entire set, proving their dynamics as a band with plenty to offer.

Headliners The Devil Wears Prada were joined by Los Angeles melodic hardcore band The Ghost Inside, who were fast-paced and energetic from start to finish. They gave a high-intensity performance, driven by Jonathon Vigil’s passionate vocals. The Ghost Inside tore the crowd apart and raised the tension inside The Glass House. They followed performances by I Killed The Prom Queen and Dangerkids.

The Take Action Tour, presented by Sub City, benefits the Living The Dream Foundation, with a donation of 10 percent form each ticket sold. Living The Dream and a non-profic organisation providing hope and inspiration to children and young adults afflicted with life threatening diseases. The foundation will bring a different fan out to select tour dates where they will have their Dream Day with the bands. Take Action kicked off in Ventura on March 12th and will be touring through till April 2nd in Columbus.

Posted by Unknown at 5:45 PM No comments:


Marc O'Reilly, humble but energetic singer/songwriter from the Emerald isle. Started off with his track 'Get Back' featuring punchy, bluesy guitaring and the captivating husky Irish slur we all love over the top of that which made for a great opener. Discovering this chap only a few days prior to the gig, what really grabbed my attention was the uptempo istrumental passages typical of an Irish jig style piece of music in which the musicians would go crazy on stage. A Mandolin, fiddle and bodhran would slip perfectly into the background for the rhythm section.

Nonetheless, Marc successfully kept the crowd enthralled. Although a seated venue and just himself on stage he held a great presence, losing himself in the instrumental passages and regaining focus for the next vocal section really brought you into his world. Always inspiring for me to see a genuine and talented songwriter immerse themselves in the songs they write.

'An African Day' was another song in the setlist in which I really enjoyed. It was interesting to hear a musician with strong, Irish musical roots changing effectively to another influence, in this instance, his experiences abroad in West Africa. My favourite song by Mr O'Reilly, 'You Never', was his strong finish to his short but impactful set."even when your lying eyes are closed" really spoke volumes to me, a great lyric and a great song to finish on.

I strongly suggest anyone interested check him when he comes back to England with a full band on April 3rd as well as his upcoming album release 'Human Herdings' on 28th of March. Good stuff!

Andy McKee exceeded all expectations for me. That man has such an incredible sesne of harmony, melody and rhythm and is a privilege to witness live as an admirer and fellow musician. Art Of Motion, Everybody Wants To Rule The World, Drifting, Keys To A Hovercar, Rylynn, The Reason, Africa, Tite Tright Night and Heather's Song were but a few of songs Andy performed with an exclusive live twist such as different percussion fills or riff fills as well as dynamic variations. A joy to see the pieces of music I have listened to countless times still being renewed.

What made it such a spectacular performance for me was how at one he was with the piece he was performing. I think that his music being instrumental lets your mind wander and attach whatever significance it wants to what you were hearing. Rylynn was always that song for me, depending on my mood it would evoke a different feeling or memory everytime.

His intereaction with the crowd was also a joy to experience. A humorous, friendly and charismatic chap, really connected with the audience and included us in all his melodic soundscapes. As an aspiring musician I couldn't help but marvel at his technical and rhythmic prowess let alone as anyone who doesn't study music or play an instrument. The sychronisation and passion he holds towards his art is a beautiful thing to experience live.

I don't normally let myself get too nostalgic when I see a musician live who has inspired me for years but the atmosphere and anticipation of Andy McKee's performance, I couldn't help myself. I've been a consistent admirer for five plus years now and it refreshing to prove to my eyes and ears that he is in fact real.

An EP release is to be anticipated for April 8th called 'Myth Maker' which features piano and electric guitar as well as what Andy does best on acoustic guitar. Emotive, soulful and beautifully crafted music. Everyone you're welcome in being introduced to such an amazing guy.
Posted by Unknown at 5:53 AM No comments:

Tough Stuff are a pop-punk band from Orange County, CA, who have caught my attention at a few recent shows. These guys deliver a great performance packed full of energy that drives their fans wild. If you get a chance to see them be prepared for a truly fun and enjoyable show.

toughstuff.bandcamp.com
Posted by Unknown at 12:57 PM No comments:

Just stumbled across the new release from Fast Response, a melodic-punk band from Croatia.

Their album "Welcome to Corruptia" started streaming on the 19th February, as a follow up from last year's EP which is available for free download.

Packed full of energy and some great vocal harmonies this is definitely worth a listen!


www.facebook.com/fastresponsepunkrock
Posted by Unknown at 12:54 PM No comments:

Email ThisBlogThis!Share to TwitterShare to FacebookShare to Pinterest
Labels: Xchange

Intervals: progressive sensation from Canada. Originally known to be an instrumental progressive band until recently adopting the voice of Mike Semensky to deliver a whole new interpretation to the songs that have created them this dedicated fan base. Moreover, how impressive it is to see they achieved such a transition without spoiling what made Intervals, Intervals in the first place: Aaron Marshall's unique and rocognisible style of writing, with interesting phrasing and 'intervals' (pun intended..), has very much so created his own sound. Also being the first act on, it was inspiring to see such a level of appreciation and dedication from the fans as they were on early and the queue stretched to the other side of Camden Market... with their new album set to be released March 4th and on a potent high with 'Emphemeral', Intervals succeeded in impressing the London crowd on their first visit to the isle and left us wanting more and definitely expectant of a future appearance...!

Metallers from London Town, The Safety Fire, were next on the bill. Crazed on an overload of energy throughout their whole set that fueled the crowd to do go crazy themselves. Impressive lead vocals both clean and scream was a definite prominent appeal for me, awesome frontman whilst retaining a sense of humbleness towards the crowd, which might have been why they accepted a wedding proposal to take place during their set from a couple of fans? Who knows... but overall! The performance was a filled with juicy solos and memorable, chunky riffs. Job well done chaps!

Now onto Tesseract. Tesseract never cease to impress me and leave me in awe with their technical, rhymic and performance skills. The captivation and attention their songs demanded was inspiring and evident during their instrumental passages when the crowd's eye's would fixate on the stage unblinking. I never feel it too necessary to say this but Tesseract are definitely one of the few bands I prefer to see live than listen to at home. Ashe O'Hara is one heck of a frontman, the voice on that man! On top of this euphoric experience were the chunk-grooves, never failing to snap the crowd out of their mesmirised state straight into a headbang frenzy initiated by such songs as 'Nocturne' and 'Concealing Fate Part Two - Deception'.

Protest The Hero to put the icing on the cake of metal goodness. They brought onto the stage a great sense of fun-loving and energy all glee-faced and in the moment. Apparently a contagious condition as the crowd really absorbed it and gave the lead singer a run for his money when they would drown out the sound from the stage with their incessant chanting. 'Clarity' was a particular highlight of mine, inspired by Star Trek revealed Rody Walker, which in my opinion can only make a song better. Other highlights to their set was the versatility of the vocals produced by Rody, amazing vocal acrobatics and range within cleans and screams as well as the lea guitarists winding, melodic solos throughout the performance.

All the while, graced with the presence from John Browne, Olly Steele and Mike Malyan of the mighty Monuments. An awesome all-round experience, not just the result of fine musician work but an example of the loyal and committed fanbase that the metal world is proud for having
Posted by Unknown at 7:49 AM No comments:

Fellow Canadian Hannah Georgas started off the bill. The introduction to the set was a very atmospheric and minimalistic style with punchy percussion and sustained, floaty lead synth. Slowly evolving into a more melodic vibe with guitar and bass becoming more prominent with cleaner synth melodies. All the while Hannah Georgas kept a delicate but very present lead vocal line over the top which kept the crowd captivated. The overall low dynamic of the set was really effective in highlighting the energetic passages. A great style of music to imbue the crowd with anticipation for more.

Dallas hardly had to take a step onto the stage when the crowd erupted. Starting out with songs from his latest album 'The Hurry And The Harm' and for the middle part of the set Dallas went solo to connect to the fans who have been with him from the start. As soon as a harmonica was handed to him we all knew 'Body In A Box' was immeninet and the chorus of people singing along with him was sweetly defeaning and awestriking to witness and be a part of. Other highlights to the performance was an acoustic version of 'Boiled Frogs' from his famous past post-hardcore band Alexisonfire, 'The Girl', 'Sleeping Sickness', 'Sorrowing Man' and many more gems of his repertoire. Also the bluesy muddy instrumentals were an interesting insight into the direction Dallas is slowly moving towards with his music. He kept his reputation of being a humble man and musician with his favour to the fans to turn off their phones during the performance of 'Body In A Box' which always stirs a great respect for him.

An overall captivating night with flawless vocals from both acts!
Posted by Unknown at 7:21 AM No comments:

Email ThisBlogThis!Share to TwitterShare to FacebookShare to Pinterest
Labels: London, Review
Older Posts Home
Subscribe to: Posts (Atom)
From London to Long Beach with a passion for sharing great music, we bring you The Music Xchange

Home
About Us
Xchange
Review
Replay